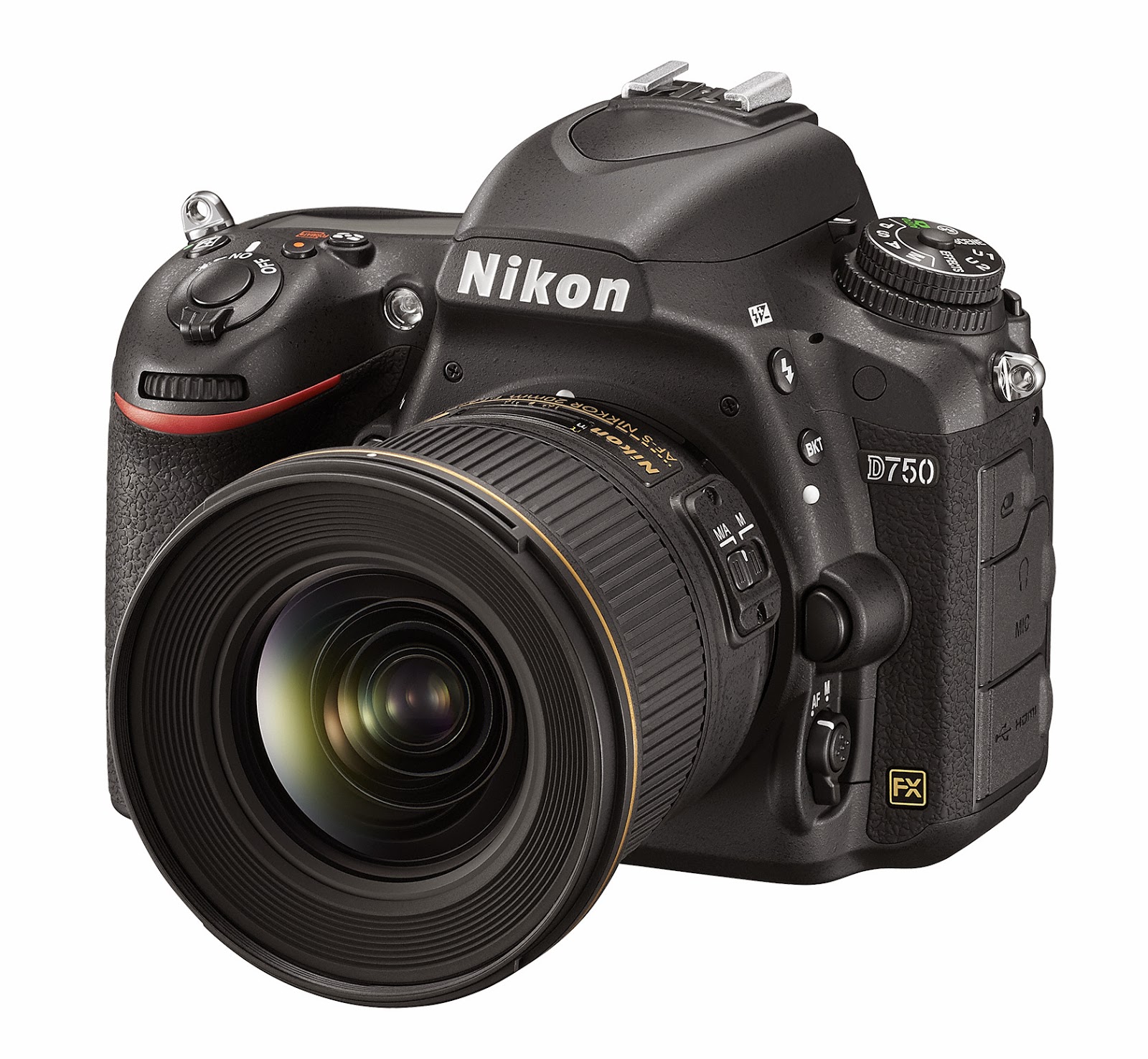 Now to be honest, my first reaction to reading the D750 specifications and seeing photos of the body was... slight disappointment. Consumer looking body, no AF-on button, no pro-camera 10-pin remote connector, some important settings buttons, like ISO, along the back rather than to the top-left of the VF where all the pro bodies have had them (and where I've gotten used to finding them!), consumer-grade slide-in VF eyecup, WiFi instead of GPS darn-it (okay fine... most will actually prefer having WiFi) and what the heck… it is even lighter than a D610?! How can this be a pro body, worthy of being the "true" successor to the D700?

Then the good points starting sinking in, some to me quite unexpected, such as the fact that it potentially has even better autofocus than the D810 or D4S, with not only the excellent 51-point pro-series AF sporting the new Group-Area-AF mode, but the fact that it's rated to be more sensitive in low light allowing for focusing down to -3 EV, a whole stop lower light than the others. The D750 also has the same video mode enhancements found on the D810, including zebra-stripes to show overexposure clipping, faster frame-rates in full-HD, Auto-ISO in manual mode and more.


The D750 also boasts the same VF magnification as the D810 (with 100% coverage) and has the excellent new OLED display as well. A big bonus is that it also has the same awesome Highlight-priority metering as the D810, the new Time-Lapse Exposure Smoothing and virtually every other enhancement seen on the D810. To better even the D810, it also has a reinforced tilting rear LCD for convenient viewing of low angle or high angle shots and, as mentioned, also has built-in WiFi.

In addition, it seems to have a tweaked version of the D610 sensor, which is a good thing, since I have always been impressed with the dynamic range and high ISO performance of the 24MP sensor in that camera. Okay then… not too bad maybe… not too bad at all.

Then, upon further reflection, some of my initial negative gut reactions were probably off-base too…

The lightweight body is apparently deceptive and the camera supposedly feels rock solid and strong in the hand. Indeed, it has all new construction never seen before in a DSLR, with carbon-fibre and magnesium 'monocoque' construction, fully weather-resistant to the same specifications as the D810. In fact it looks as though the majority of the chassis of the camera, including the entire front-plate and mirror-box, is made of carbon-fibre. See the photo below…

[EDIT: The black material is likely to be a carbon-fibre composite, not the usual bonded long-fibre woven kind most people are familiar with, and this material has apparently been used on the Nikon D5300 already. It remains to be seen how this will hold up on a pro body subjected to hard use...] 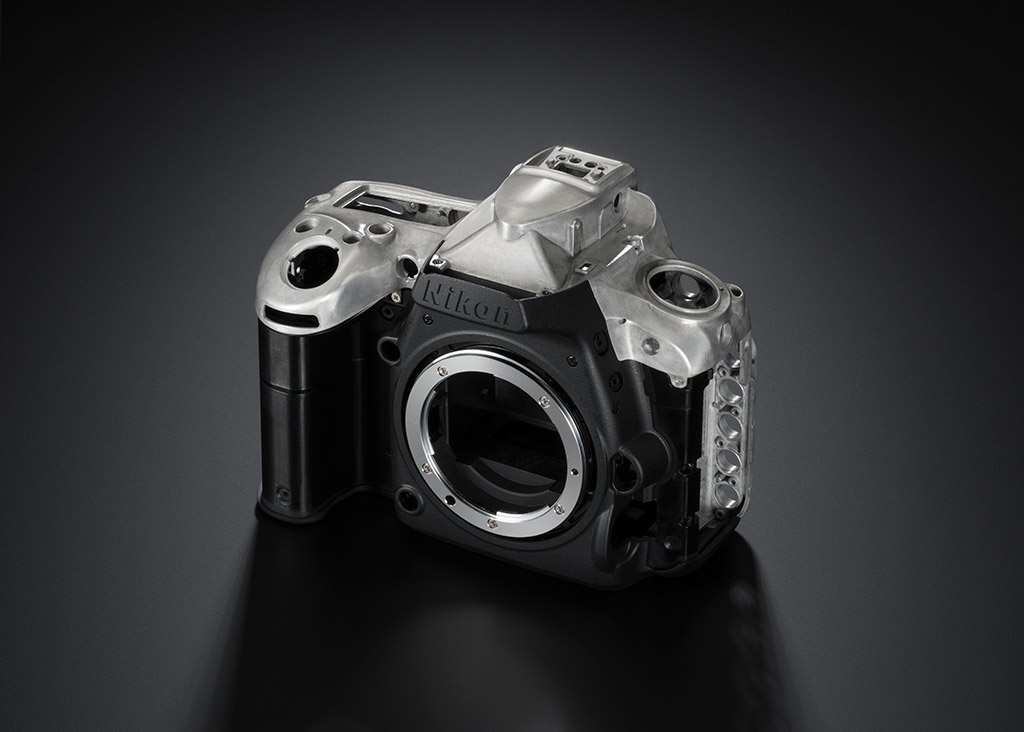 Not only does this new construction technique save weight, but it could make the D750 far more resistant to lens mount deformation. This hybrid carbon-fibre body might prove to be far more rigid than an all metal body like that of the D810, although only time will tell. Below is a back view… 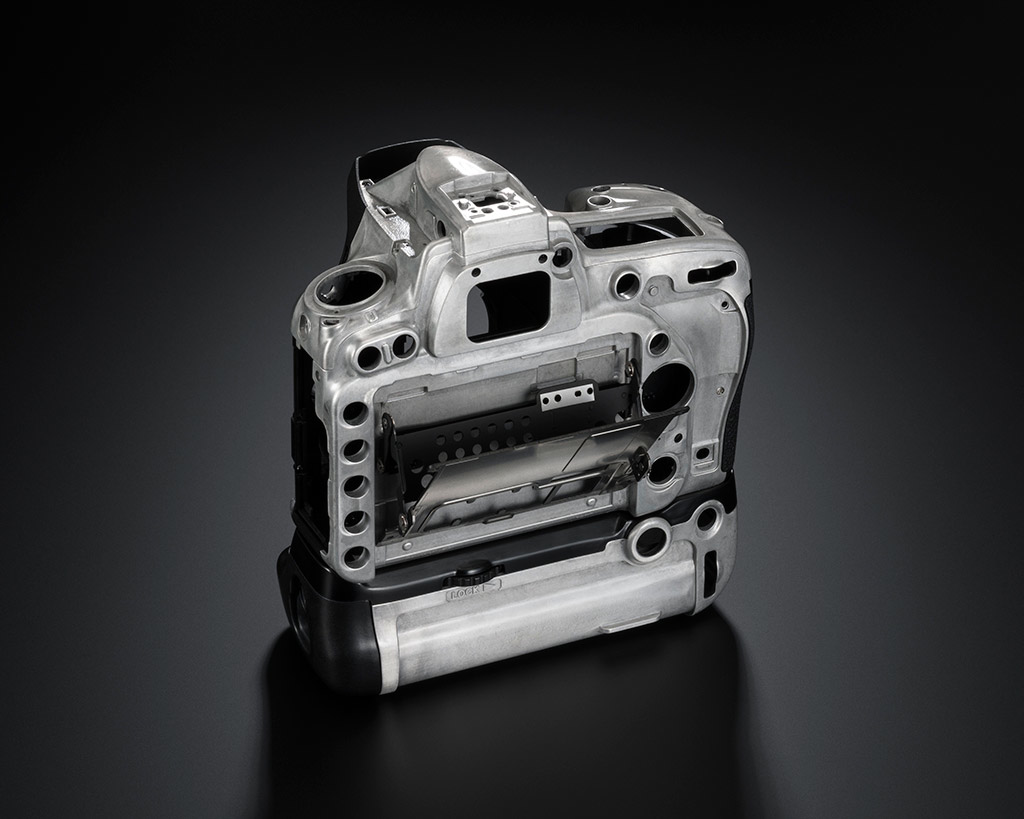 The lack of AF-on button is a little annoying but as long as AF-on functionality can be assigned to the AE/AF Lock button (which it surely will be able to) and as long as resting your thumb on the button during a vertical shot doesn't make the top of your thumb jab into your forehead like it did when I shot with the D610 (without a vertical battery grip of course), then I am okay with it. Frankly, I never really used use the AE-Lock button on my D800 anyway, preferring to set the shutter release to perform an AE-Lock upon half press. However some people might indeed be bothered by the lack of separate AE-lock and AF-on buttons.

Next, I'm sure I can get used to the new ISO button location and if, like the latest firmware for the D800, you can redefine the Movie-Record button on the top-deck by the shutter release to be the ISO setting button, then that's fine too.

Okay, the consumer VF eyecup is still, well too consumer-ish in my view and sadly it does not have an eyepiece shutter either. Thumbs down on those two things I suppose. 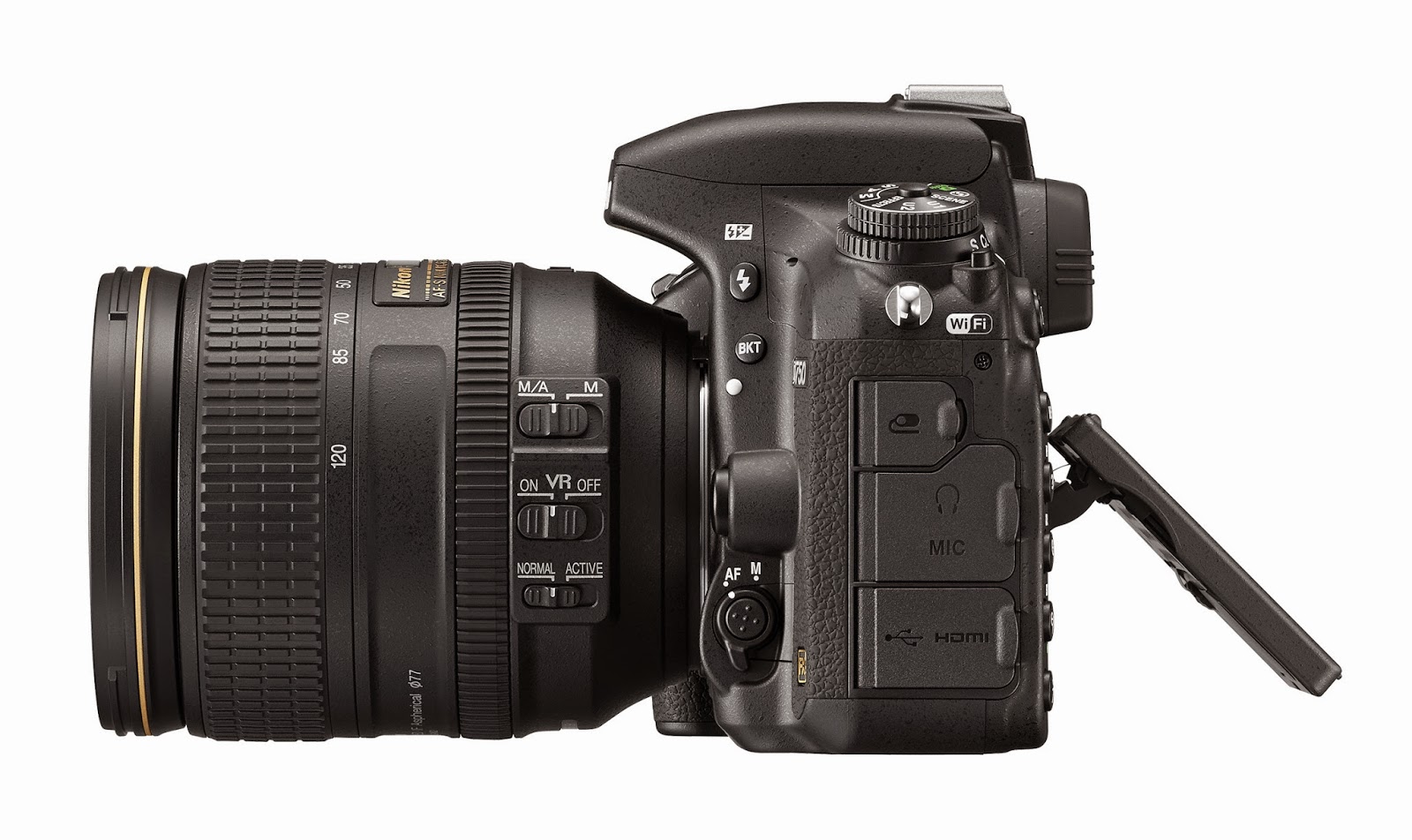 For some pros with lots of 10-pin remote cables and accessories, the lack of that connector might be quite annoying. For me personally, since I like using the external GPS unit, my main concern was that I thought the new-style mini-connector that the GPS plugs into (also the electronic remote-release socket) would be at the bottom of the left side, like it is on the D7100 and D610. With those cameras, it would be very impractical to leave the GPS cable plugged in while shooting handheld, since cradling the bottom of the camera with my left hand would mean the plugged cable would be under upwards pressure and I'd be worried about damaging the socket, not to mention the camera would be uncomfortable to hold that way. However, Nikon has wisely moved that connector to the top of the left-side port stack (see photo above), a way better location for it! Not to mention, I inherently dislike the Nikon 10-pin remote socket anyway, preferring the much easier plug-in style on the consumer bodies. I find it often quite difficult to get the threaded locking collar to engage with the 10-pin port on my D800, so I actually think I would prefer having the new style connector now that it is in a new, improved location. 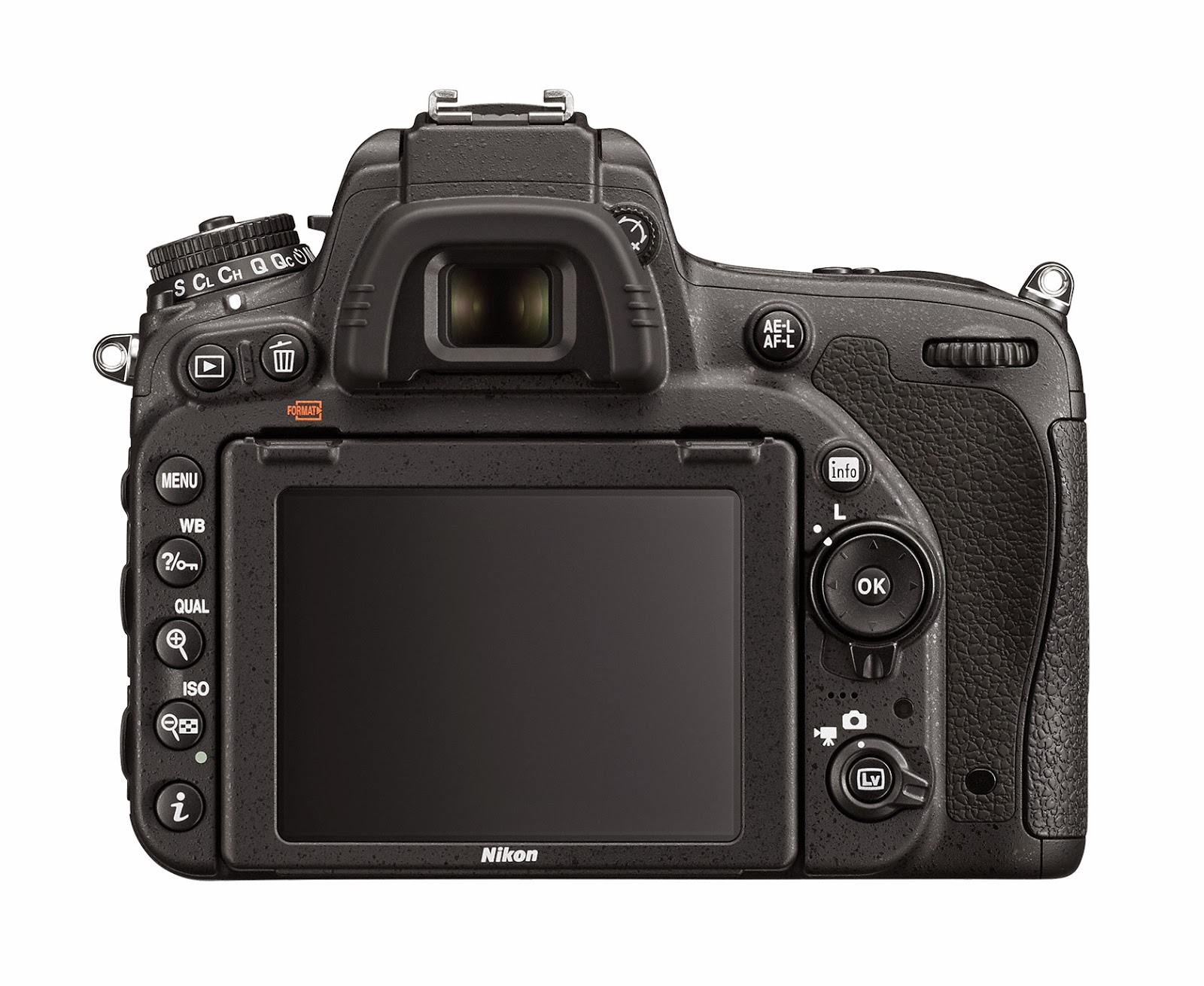 So… in the end, I am actually quite impressed with the camera, once I've thought carefully about all of its new features and decided its few limitations are not a big deal. I hope to have my hands on a production sample of the camera over the weekend and will report back with my shooting experiences in another blog entry next week…

In the meantime, we have started taking pre-orders for the D750. It will be available in the following configurations…

Note that we are not planning on stocking the 24-85 kit since I would say the 24-120 is generally a better lens and getting it in the kit is a serious bargain - you are saving $550 over buying the two items separately!

Call for more info or to place a pre-order!
Posted by Mike Mander at 4:39 PM