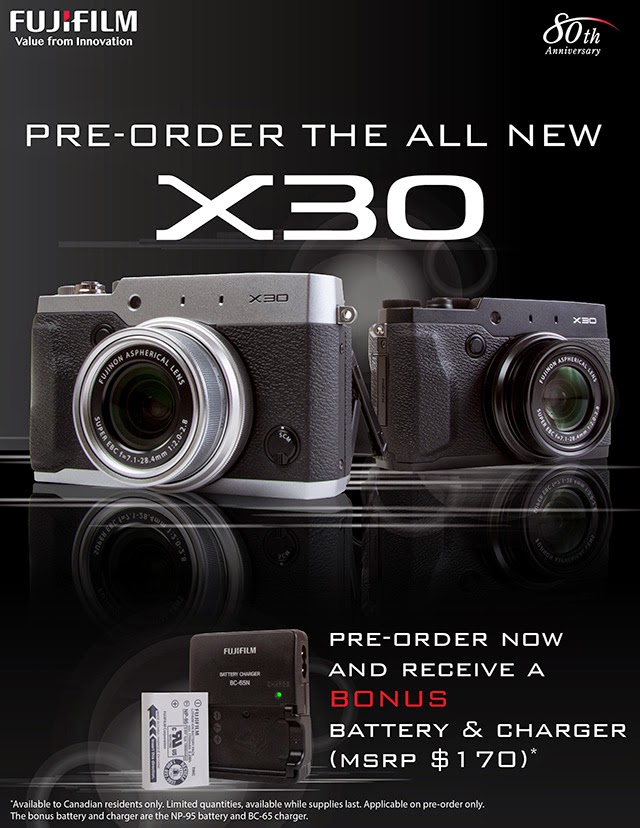 Fujifilm has announced a successor to the X20 called, unsurprisingly, the X30. While the lens (stabilized 28-112mm f/2-2.8) and sensor (12MP X-Trans CMOS II) remain unchanged (at least on paper), it might be that once I get a chance to test a production camera, they could show some improvements? In any case, there are indeed many other very substantial enhancements in Fujifilm's latest flagship point & shoot. Let's start with the viewfinder…

The X20 had a fairly unique hybrid optical viewfinder. While not in the same league as the ones on the X100 series or the X-Pro1, it still offered a big, bright optical view with a full-information LCD overlay. In practice it worked quite well, but one issue was somewhat vague parallax indication and once you had Fujifilm's lens hood mounted, a substantial portion of the visual FOV was blocked by the hood at some focal lengths. The X30 does away with the optical component completely and instead, now has a superb OLED EVF that performs on par with the one in the X-E2, both from a resolution and refresh standpoint. I had the opportunity to use a pre-production X30 a while back and the EVF was genuinely excellent, the best I have seen in a P&S camera! Focus peaking is also available for MF and to make things easier, there is now a smoothly turning control ring on the lens barrel that can operate MF!

This new lens barrel control ring has multiple functions, depending on what mode the camera is in. For example, in aperture priority, it controls the f-stop, in shutter-priority, the shutter speed and so on. You can redefine the control ring to other functions as well so this is a very nice upgrade to the X20. My only complaint is the lack of click-stops on the ring. Having a smooth control ring for focus makes sense of course, but every other function you use it with would benefit from tactile clicks. That said, with the audible feedback switch one (fake clicks), I did not find it annoying to use actually and it does have a firm, well-damped feel.

Also new are significantly beefed up HD video features, in fact they are better than any other X-system body including the X-T1! Well, at least with the X-T1's current firmware - with Fujifilm's generous upgrade policy, who knows, maybe we'll see an improvement with it as well? With the X30 when shooting Full-HD NTSC video, you can choose between 60, 30 or 24 fps. For PAL (new PAL support!), you have 50 and 25 fps. In addition, you now get full manual control over f-stop, shutter speed and ISO. Cool!

A few additional features (some new, some not) round out the X30 upgrade as follows: built-in WiFi with full camera control capability, up to 12fps shooting at full-res with an 18-frame JPEG buffer, shot-to-shot times of 0.3 seconds in single shot mode, new battery with longer life (470 shots/charge), new "Classic Chrome" film simulation mode (apparently it's similar to Kodachrome!), fully customizable Quick (Q) menu, multiple exposures, built-in time-lapse shooting and much more! The one minor complaint I have is that the camera no longer ships with a dedicated external charger - you have to use a USB cable to charge the battery in the camera. But wait...

As a pre-order special, Fujifilm is also offering a package that includes an external AC battery charger as well as an extra NP-95 battery pack at no-charge, which is a $170 retail value for free! So if you are interested in the X30, don't delay and call us to get your pre-order in ASAP. The free charger and extra battery are only available in a very limited number and only with the first shipment. In fact maybe only part of the first shipment will qualify for that promo…

If you want to pre-order this exciting new P&S, please contact us!
Posted by Mike Mander at 1:38 PM