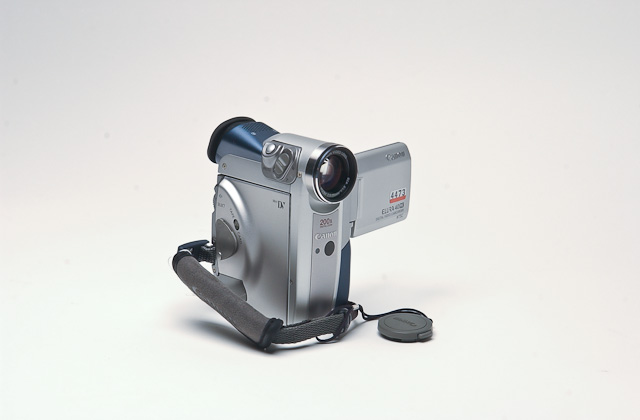 Canon's Elura 40MC is one of the smallest, lightest digital video camcorders available. Weighing around 14 ounces, this vertically oriented camcorder fits snugly into the palm of your hand (not resting on your hand like most cameras, this one fits almost inside it).

Because of its compact frame, some of its features had to be trimmed. Its 2-inch LCD is smaller than most, but its bright screen can be viewed easily even in daylight. Unlike many other camcorders, the Elura's viewfinder displays in color, not black and white. It also offers only a 10x optical zoom, not as high as other cameras, but still adequate for most users.

Unlike many camcorders whose still image quality is subpar, the Elura 40MC captures 1024 x 768 pixel still pictures on a Secure Digital media card (an 8 MB SD card is included) rather than on the MiniDV media. And if coupled with a Canon CP-10 card photo printer, you can directly print images from the Elura without going through your PC.

But it's video quality that matters most in a DV camcorder. The Elura 40MC captured excellent video, even in poor lighting conditions. It doesn't have a built-in light, but its low-light mode still managed to record impressive video with realistic colors and limited graininess.

The Elura's autofocus worked quickly and accurately, and its zoom buttons were within easy reach during filming. The basic modes of the camera make it point-and-shoot easy for the novice user. Audio quality with the built-in mic wasn't the best (we noticed some noise during recording), but the Elura comes with a port that lets you connect an external microphone.