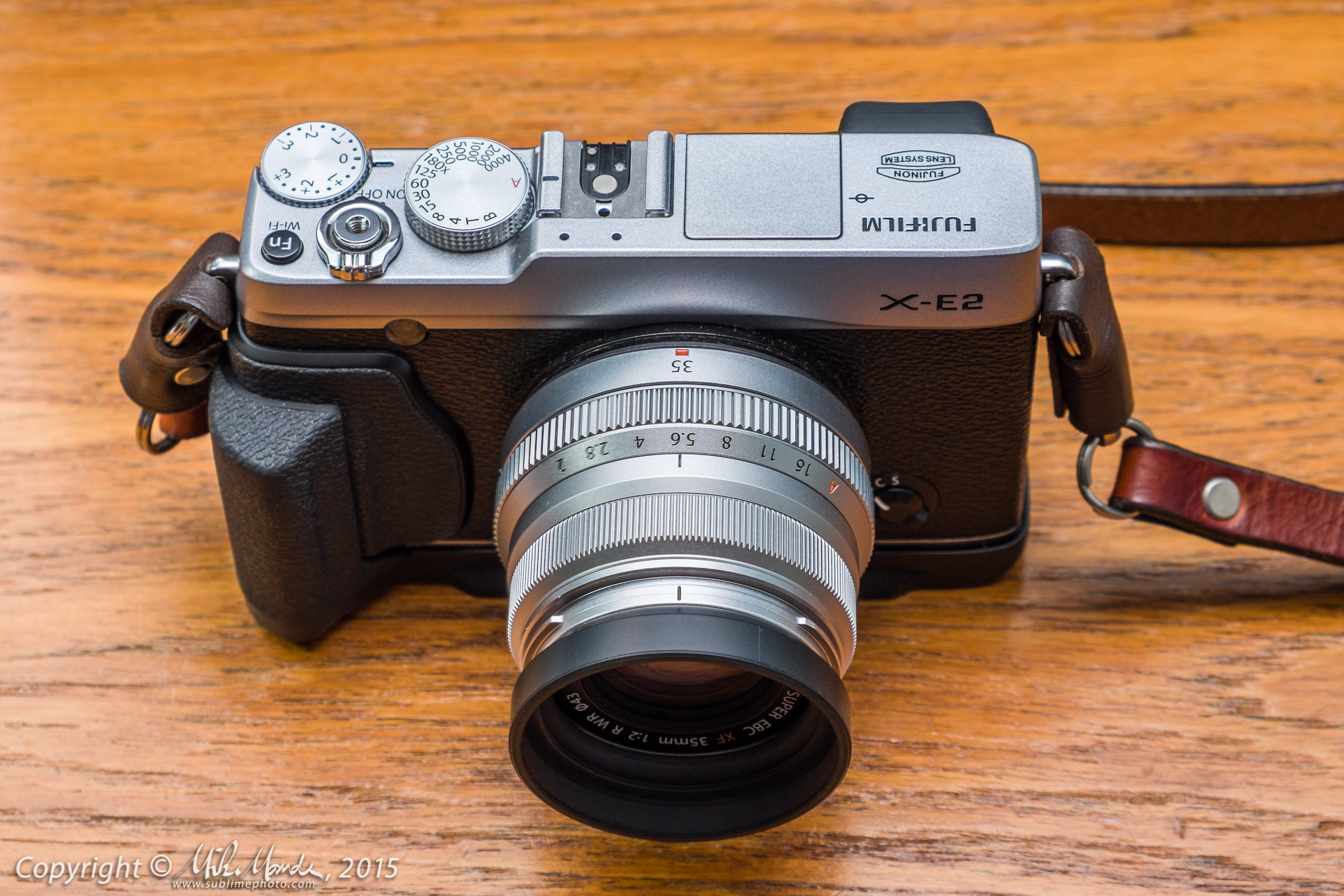 Update #2: I have now received my own XF 35mm f/2R WR lens and published a detailed review, with lots of sample images as well. Check it out on my blog at the following link: http://mikemander.com/2015/11/tested-fujinon-xf-35mm-f2r-wr.html 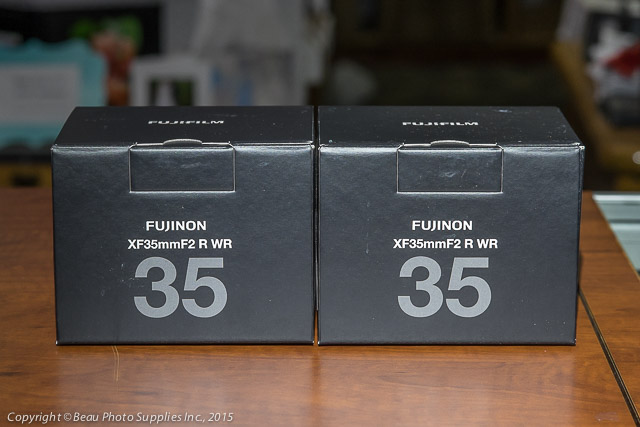 Update: We now have the new 35mm f/2 (black version) in stock! The silver model will be coming in a week or so. I'll be receiving my own personal one within the next week too and I'll be doing some testing and reporting on the quality of a production version of this new lens soon. See the rest of this blog entry for some preliminiary testing notes.

The new 35mm f/2 is due to be available for sale on November 14th at a price of $499 CDN. The lens will come with a small, 43mm thread-on lens hood and you can use the standard lens cap with it. There will also be an optional bayonet metal lens hood for an estimated $59.95. This hood is tapered and "vented" with slots cut in to allow for better optical VF viewing with the X-Pro1, and presumably, future models with a similar rangefinder-style Hybrid Multi Viewfinder. Despite its tapered design, thankfully it will still allow for use of the supplied, normal snap on lens cap, which is something you cannot do with the rectangular metal hood on the 35mm f/1.4. Not sure yet if the hood can be reverse mounted though? Here is a shot of the optional hood… 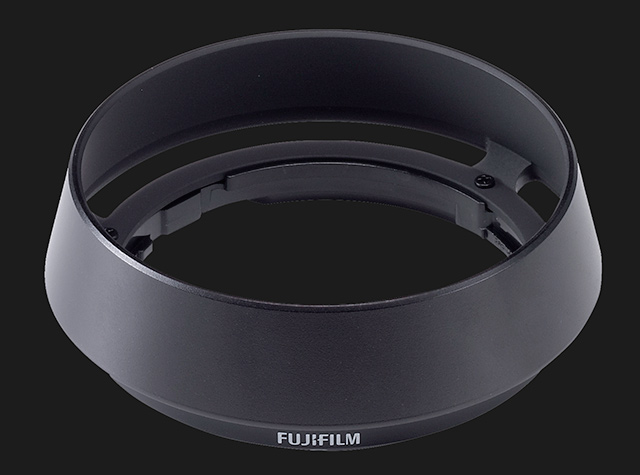 Here is a photo of the black and silver versions, side by side (again, click for a larger view) which might help you decide which one to preorder… 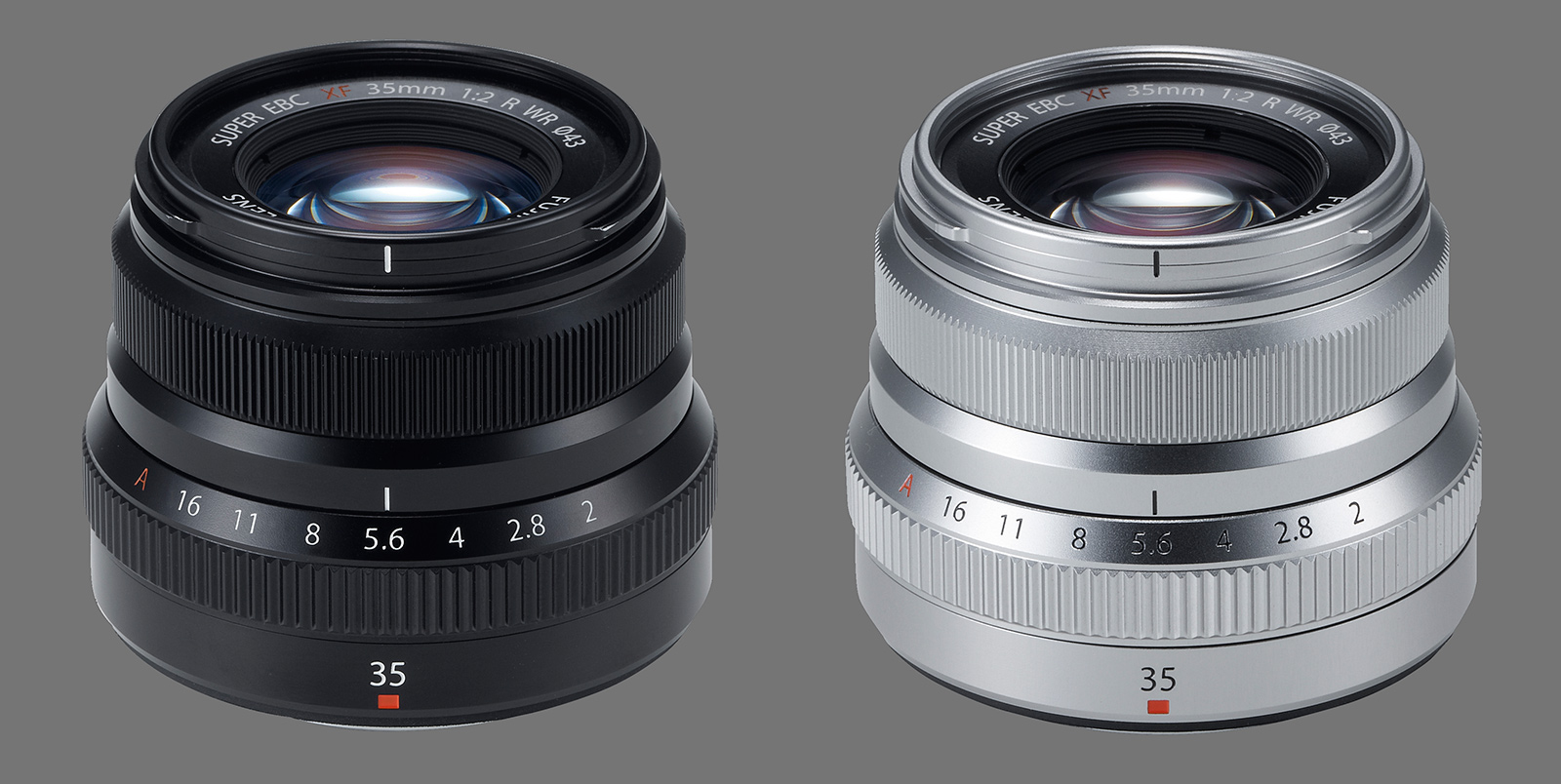 I had a chance to test out a prototype 35mm last week and considering it was optically not a final version, I was still impressed with its image quality.

Due to its unfinished nature, I won't comment too much on what I saw, and I cannot post images either, but I will say that the lens is very sharp even wide open at f/2, at least in the central area where my subject was, the bokeh is surprisingly nice and the lens is quite flare resistant. Mechanically, it is beautiful with an excellent feeling aperture ring, just as nice as the one on my 90mm f/2 in fact, and has an overall very solid feeling metal build. As you can tell by the WR designation, it is also a weather resistant lens and its really nice that so many of Fujifilm's new lenses are designated WR! With its tapered design, it has a classic rangefinder lens look, especially in silver, although the taper also means it has smallish 43mm filter threads.

The one negative thing is that the lens is not a fully-corrected design optically, so unlike the 35mm f/1.4, it does suffer from noticeable barrel distortion when shooting raw, which will require software correction. Depending on the raw converter, this might be fully automatic (Lightroom), require you switch on auto-lens-corrections (Iridient Developer) or be entirely manual (PhotoNinja), to give you three examples. Still, the distortion is not too severe, less than on the 10-24mm I believe, which also requires correction, and that lens is still capable of being quite sharp in the corners. A final analysis of the new 35mm f/2's image quality will have to wait until I can test a shipping, production version. I am quite certain the positives will outweigh the negatives though, so I am fairly sure I will be picking one up for myself as well. That said, I still think the the existing 35mm f/1.4 may still offer slightly better overall optical quality if that is your most important criteria, albeit perhaps at the expense of focus speed and a much less rugged, non-WR design. We shall see…

Next up, Fujifilm has announced the new XF 1.4x TC WR teleconverter, which will sell for $599... 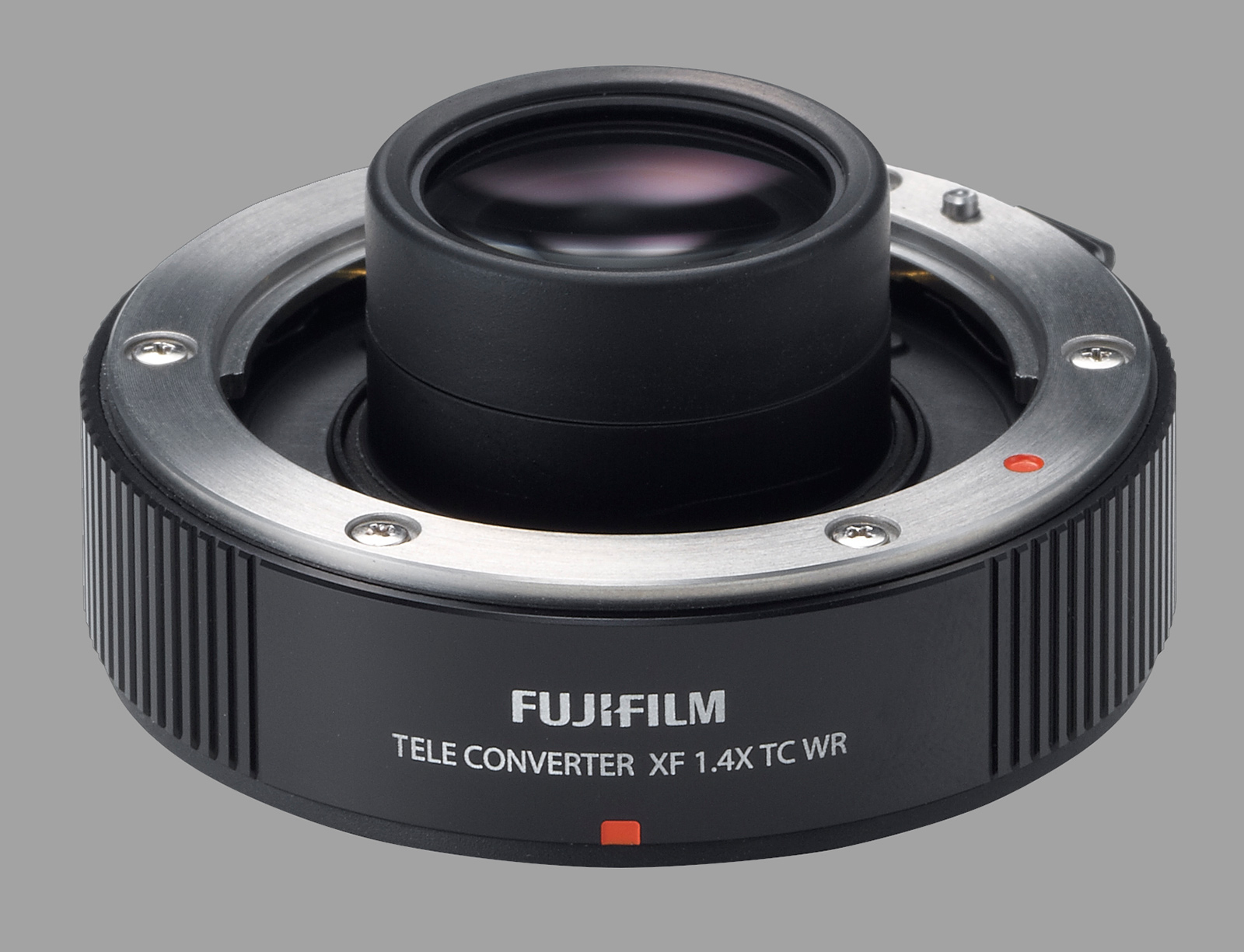 The new teleconverter is slated to be available for sale on November 14th as well. The WR designation means that it won't compromise the weather resistance of your lens and body combination, presuming they are WR too of course, although at present the only lens the new TC will work with anyway, is the weather resistant 50-140mm f/2.8 zoom. With a design that requires the optics of the TC to extend into the attached lens itself (you can see that in the above photo), its use will be limited to those lenses that are designed to accept a TC, so for now the aforementioned 50-140mm, as well as the 100-400mm zoom and 120mm macro that are on the roadmap for next year... at least that's what I've heard. If you were buying a Nikon or Canon TC, you'd be in the same boat since they too have designs that extend into the attached lens, which generally allows more optimal matching of the optics between the lens and TC. There have been third-party teleconverters that will mount on any lens, but often they will give an inferior result due to their non-optimized, unmatched design.

So… putting the new 1.4x TC onto your 50-140mm f/2.8 will essentially get you a 70-200mm f/4 zoom, with a very slight increase in size and weight only. Yes, the 1.4x TC will effectively lose you a stop of light at the same time as it increases focal length by 1.4x, just like any other 1.4x teleconverter on the market. A far as a full-frame equivalent, the focal length works out to a 105-295mm zoom, so it's a nice interim step between the 50-140mm by itself and the upcoming 100-400mm. We are taking preorders for the TC as well, so contact us if you'd like to get one for the first shipment...
Posted by Mike Mander at 11:42 AM