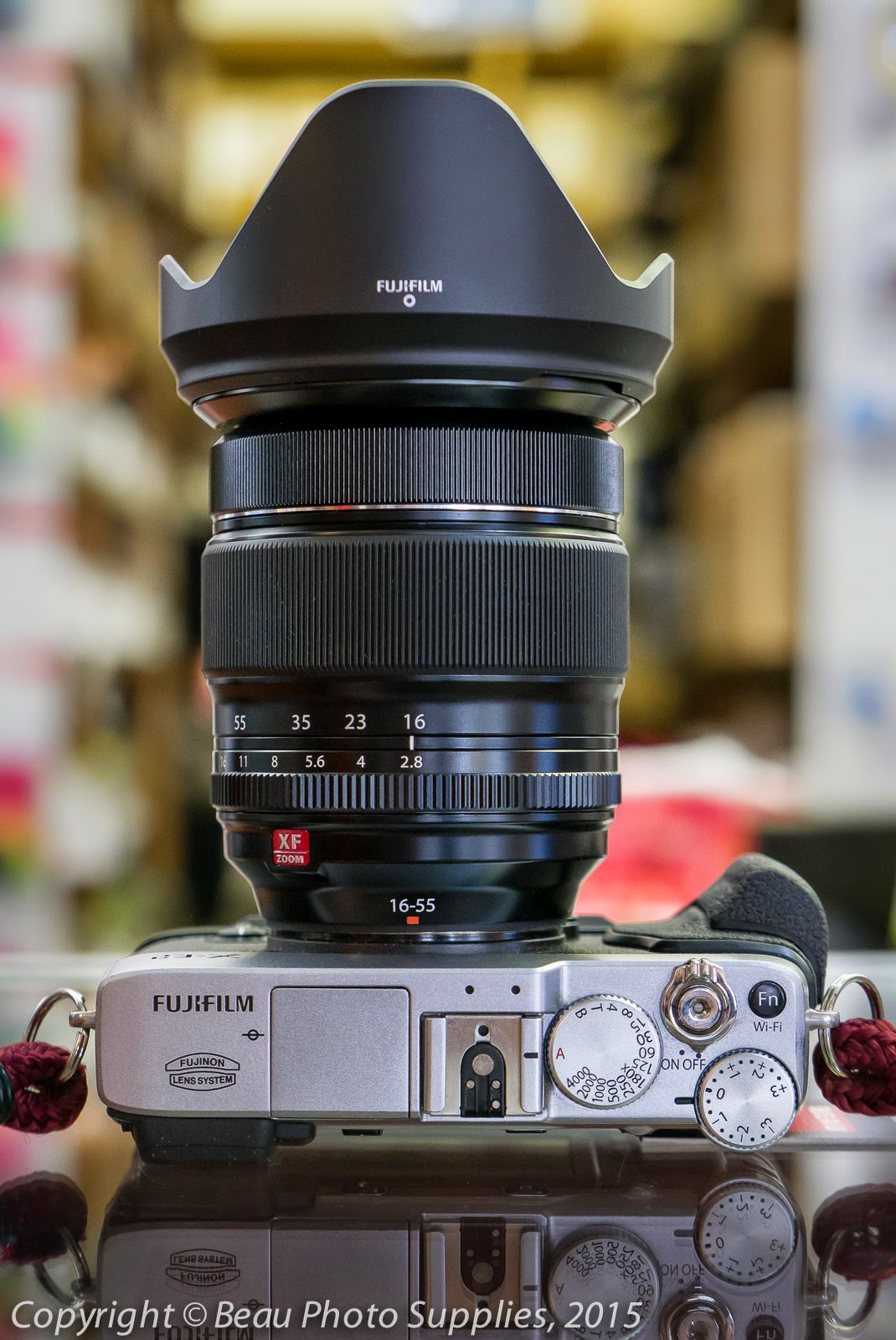 I had a chance to try out a preproduction copy of the upcoming Fujinon XF 16-55mm f/2.8R LM WR the other day, Fujifilm's new professional grade mid-range zoom. Notably, it does not have OIS (optical image stabilization) which seems to have gotten a few people riled up. Originally, Fujifilm specified OIS for this lens, but then a few months back when Fujifilm showed a prototype at the 2014 Photokina trade show, it was suddenly missing that feature.

Contrary to apparent popular opinion, I am quite pleased Fujifilm decided not to include OIS. Why? Well as you can see in the photos of this lens, it is already quite substantial (although not quite as heavy as it looks in my view) and adding image stabilization would have meant either increasing the lens' girth even more, or shrinking the optics instead which then would likely lead to more vignetting and other image quality concerns. More importantly, I have seen far too many non-telephoto, stabilized lenses suffer from image quality issues, most often inconsistent edge and corner softness and variable chromatic aberration, which is rather hard to compensate for properly.

A lens projects a round image-circle, slightly larger than is needed to cover the rectangular image area of the sensor (or film!) that takes the photo. Often times, especially with wide angle lenses, the closer you get to the edge of the image circle the more compromised the sharpness might become, often with increased vignetting and chromatic aberration too. While you are holding a stabilized lens, the image circle is constantly drifting about, compensating for your handholding jitter and movement. If you happen to take the photo while one corner of the sensor is near the edge of this drifting image circle, that corner might have worse sharpness than then rest of the frame. Wide-angle lenses tend to require very precise alignment of all their optical elements to achieve sharp, consistent image quality edge-to-edge so I don't know about you, but to me, having a group of lens elements tilting about continuously inside the lens doesn't strike me as a good recipe for optimal image quality!

You might think that simply turning off OIS will bring things in line, if ultimate image quality is what you're after and indeed, that might be the case. Unlike some other manufacturers, Fujifilm does use active electromagnetic centering of the stabilized lens group on their OIS lenses, which should in theory keep everything lined up perfectly. You can hear the faint humming of the OIS system, even when it is switched off. However I don't entirely trust even that to keep everything perfectly aligned and would rather have a zoom where everything is locked down solidly, in perfect alignment from the factory. On the other hand, telephoto lenses (primes and zooms) seem to have an optical design which is much more resistant to stabilization induced quality concerns. Their longer focal lengths also stand to benefit more from stabilization too, so I most certainly do like to have OIS on those!

Hopefully the above simplified (but still lengthy) explanation conveys my concerns and why I am happy to not have OIS on this lens? In addition if you really want stabilization, Fujifilm already has two excellent, less expensive mid-range OIS zoom lenses, the original lightweight 18-55mm f/2.8-4 and the newer weather-resistant 18-135mm f/3.5-5.6 which has a size and weight closer to that of the upcoming 16-55mm. Based on my tests of this preproduction lens however, I am quite certain the overall image quality will be a big step up from those other two zooms. 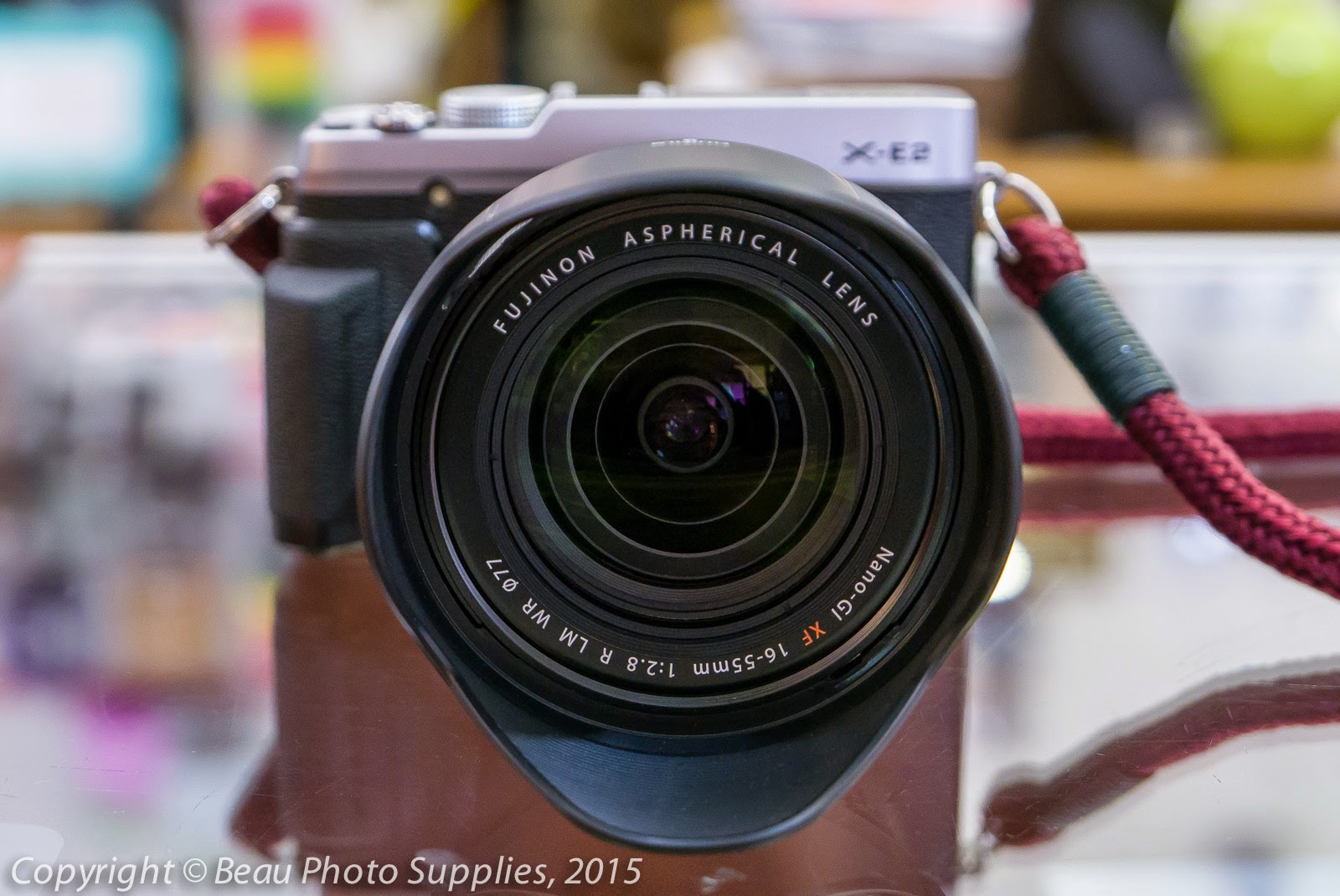 While I am not permitted to share photos I took with it, I will say that its image quality looks very promising indeed. The bokeh was nice and smooth, f/2.8 centre sharpness was great at all tested focal lengths, vignetting was minimal and purple fringing along high-contrast edges was essentially nonexistent even wide open. Chromatic aberration, which is easily corrected for automatically (at least when it is uniform towards all four corners), was very low too. Extreme-corner sharpness seemed excellent too at f/5.6 plus, and I was told this may improve further on the final production lenses since this sample was known to have optics that were not quite production level.

Mechanically speaking, even this pre-production sample was gorgeous, just like the production 50-140mm zoom I had tested. The new 16-55mm also feels extremely well made and its zoom action was silky smooth with no tight spots anywhere in its range. The aperture ring has f-stop markings (yay!) and had what I would consider perfect resistance to accidental movement. The 1/3 stop detents were crisp, tight and generously spaced. The lens was wonderful to shoot with from a tactile sense and I was quite reluctant to give it back to the rep!

About the only concern I have, is that unlike many of Fujifilm's superb primes, this zoom is not 100% optically corrected and thus suffers from some native barrel distortion at the 16mm end (with a minor moustache sub-structure I believe), which then progresses into slight pincushion distortion at 55mm. I don't see this changing in the final shipping version, but luckily the lens appears sharp enough that digital correction of this distortion seems to incur only a slight loss of quality in the extreme corners. Lens correction metadata was already embedded in the EXIF data of my test images, since Adobe Lightroom and Iridient Developer automatically corrected for distortion and vignetting. In fact, opening the images in Lightroom first, I was astounded at how well corrected the lens appeared to be for distortion, but when I opened shots in Iridient Developer, which allows one to switch off metadata-based auto-corrections, I noticed that it did have some obvious distortion. However as mentioned, there was only barely a hint of chromatic aberration and vignetting was surprisingly minimal, even when corrections were switched off (although with the lens' large diameter optics, that isn't too surprising perhaps), so I am quite confident that overall image quality will remain excellent, even after digital corrections are applied.

It was a mostly overcast day, so I did not have chance to test the lens for flare resistance, however with Fujifilm's new Nano-GI lens coating technology and their excellent HT-EBC coatings, I am expecting that it should perform well in that regard. 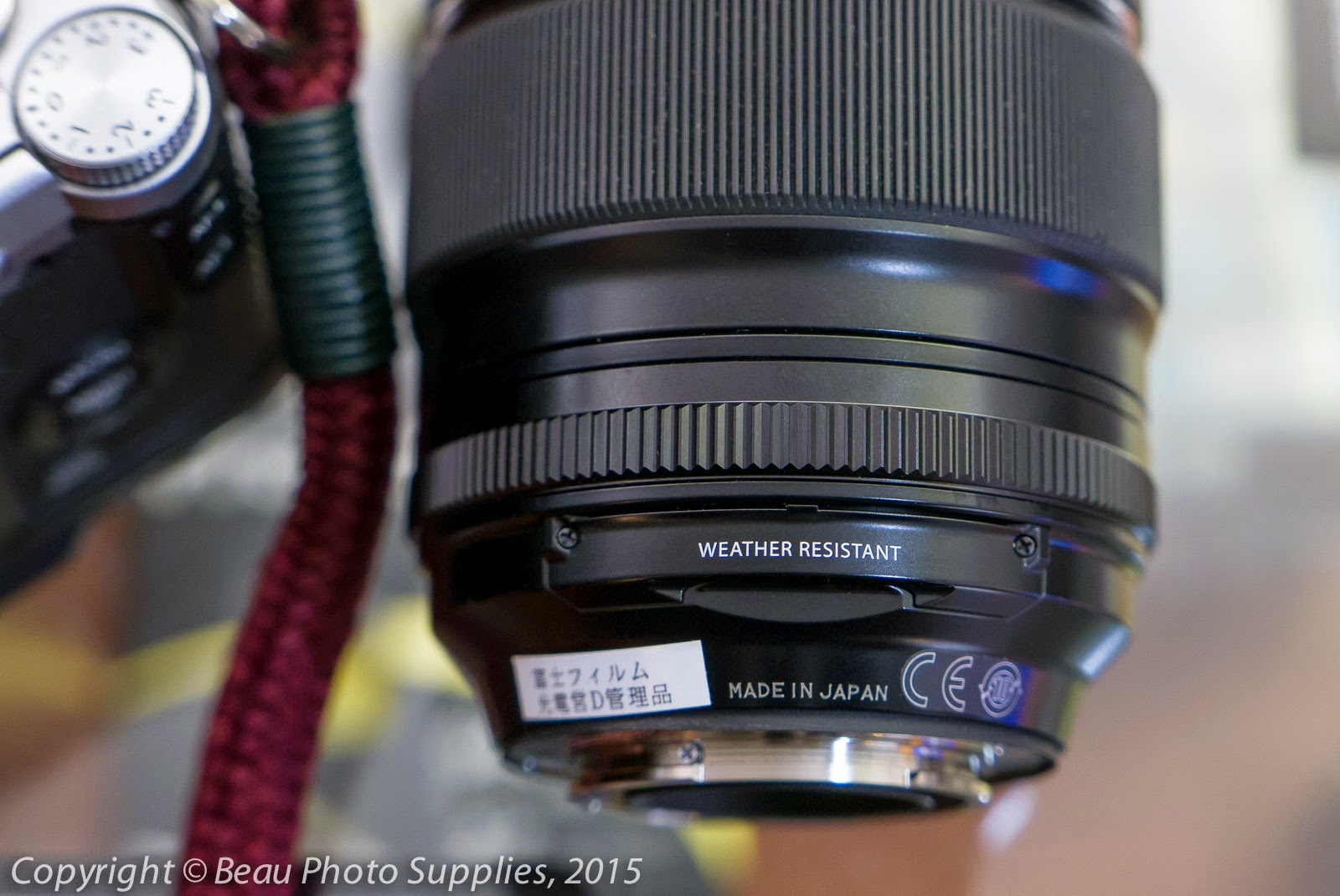 On the above shot, you can see a closeup of the lens' filtered zoom ventilation system, the two narrow slits above the words "WEATHER RESISTANT" which was first seen on the 18-135mm kit zoom. This lens does extend slightly when zooming and being weather-sealed, this means that it must also inhale air from somewhere. In order to prevent dust from accumulating inside the lens over time, there is this single air ingress point, which is filtered to prevent moisture and dust from entering the lens when it extends. Nice design!

Based on the very promising image quality of this early preproduction copy, I have already pre-ordered one of these lenses for myself and naturally I will provide a comprehensive image gallery of test shots once I get my hands on it. If any of my observations about this lens change after testing a production copy, I will also publish those findings. You can pre-order this lens too - its price will be $1,299 here in Canada and it should start shipping in February already.

I'll leave you with one last shot of this substantial new zoom mounted on my X-E2. I am certainly not overjoyed at its bulk, but since this lens could replace two or more prime lenses in my camera bag, especially when I want to travel light, I think the size and weight will be manageable. After all, despite being an f/2.8 zoom, it isn't much larger than competing f/4 mid-range pro zooms but since the X-E2 is a svelte body, smaller than some Micro-4/3 bodies even, it does make the lens seem rather large... 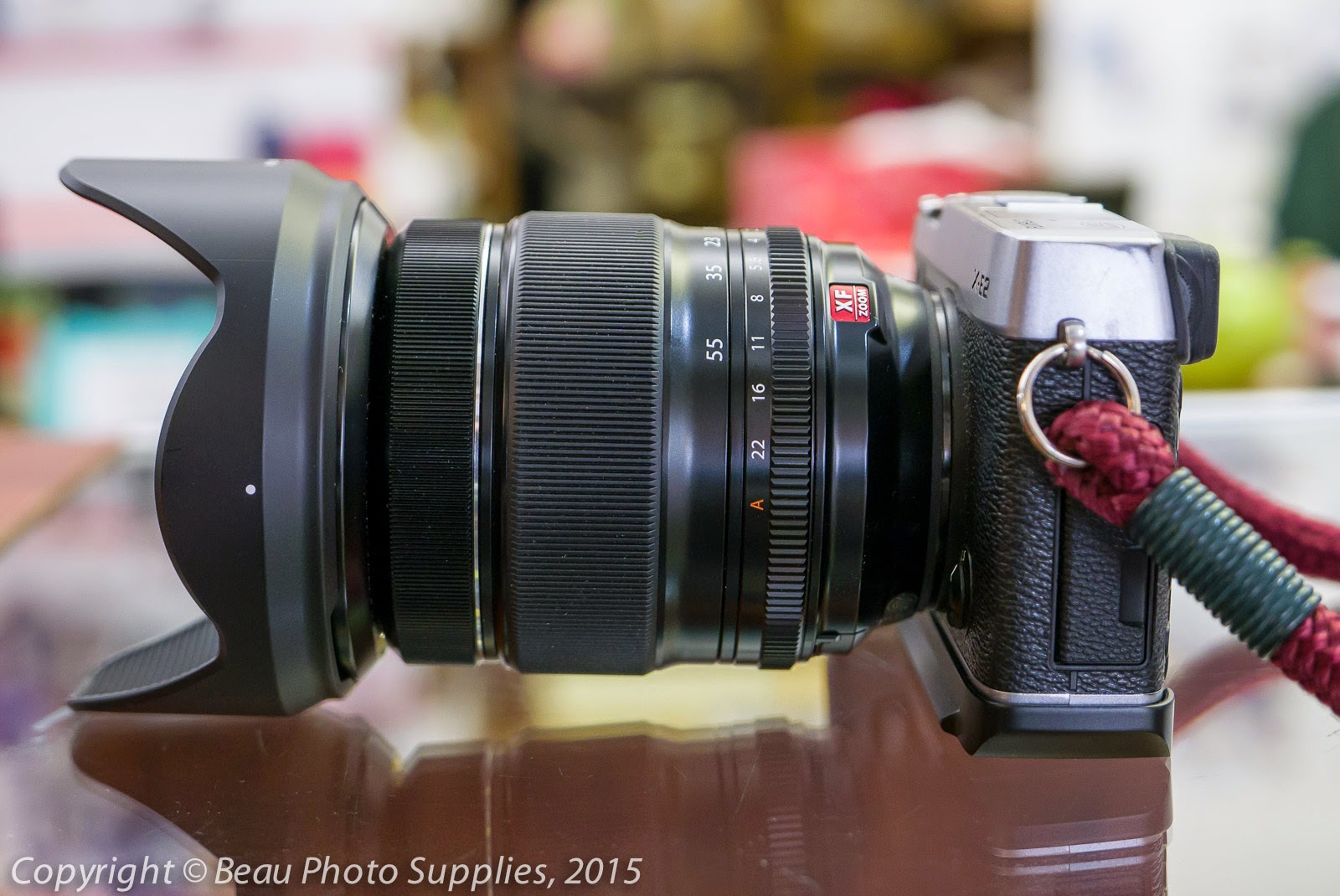