This is a continuation of the previous blog entry: Hasselblad H5D-50C - CMOS sensor magic!

The second instalment of my Hasselblad H5D-50C tests will compare its sensor performance to the Nikon D800. This could be interesting for several reasons: Sony makes the CMOS sensor used in both cameras, the D800 is known to have excellent usable dynamic range with very clean shadows that are free from colour noise or banding and cross-hatching artifacts and lastly, in the past most digital backs were not known for their high ISO performance. So the question is, how does the new H5D-50C with its 50 megapixel sensor stack up to the the Nikon D800 when it comes to dynamic range and high ISO image quality? As a matter of fact, the new Hasselblad equals or outperforms the D800 in these tests at pretty much every ISO, right up to ISO 6400... remarkable!

Following are comparisons in the same style of the first instalment where I had shots from the old and new Hasselblad 50 megapixel sensors, this time comparing the Nikon D800 (always the left image) with the H5D-50C (the right image). The same aggressive Lightroom settings were used for processing the Nikon and Hasselblad files as well, with a significant overall exposure boost and additional opening up of the shadows, and I have a screenshot in the previous blog entry showing those settings with an explanation of my testing scenario. To reiterate, I underexposed the shots quite severely, more than they actually needed to be, in order to torture test the cameras in a situation where one wants to capture maximal dynamic range with a single exposure, thereby requiring heavy adjustments to the exposure afterwards.

One important thing to note with all these tests, is that there is absolutely no guarantee that using the exact same settings in Lightroom will yield the same degree of sharpening or noise reduction between different camera models. In fact, I would almost guarantee that it won't! However one still still get a pretty darn good idea of the performance, especially if the differences between cameras are dramatic. This is why I am also supplying a link for downloading a set of three raw files, all shot at ISO 400 with the same exposure, one from the older H5D-50, one with the new H5D-50C and one from the Nikon D800. You can compare those at your leisure in whatever raw converter you want to use. Please do not republish those photos without permission: they are for your own comparative evaluation only...

If anyone would like to download the full set of comparison images at all ISOs for two Hasselblad systems used, then just send me an email and I will provide a link for the 737MB Dropbox link. Also note that this was a very rushed test and in retrospect I would have liked to do several things differently. First off, I did not bother to synchronize the clocks on all three cameras. I tried to edit the time of the 50C raw files after the fact, since the camera was on a completely different time zone, but there may still be discrepancies. Secondly, I initially shot my side-by-side test with the two digital backs, then shot the series with the D800 at the exact same f-stop, shutter speed and ISO, however it had gotten a little darker at that point so the files might look a little different. I should have brought a third tripod and shot all three sets at the same time, or simply waited until it was totally dark to ensure there were no changes in the lighting. Oh well.

Anyway, the important thing to note in these tests is not the overall exposure or the sharpness of the files (as mentioned previously, I had a slightly dodgy lens on the 50C) rather the dynamic range, shadow detail and overall noise levels, especially in those highly boosted shadows. Now the comparisons! Clicking an image will open the full-res screenshot from my 27" display in a new window (again, D800 on the left, H5D-50C on the right)... 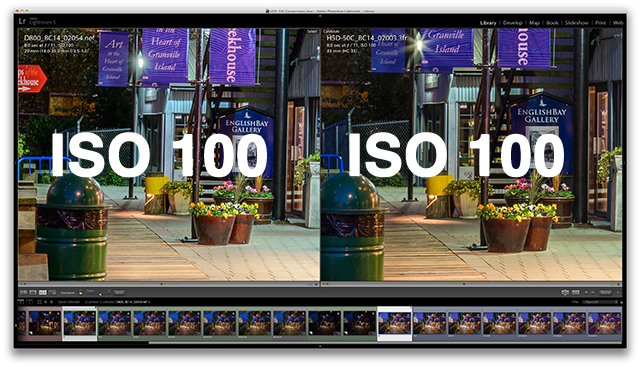 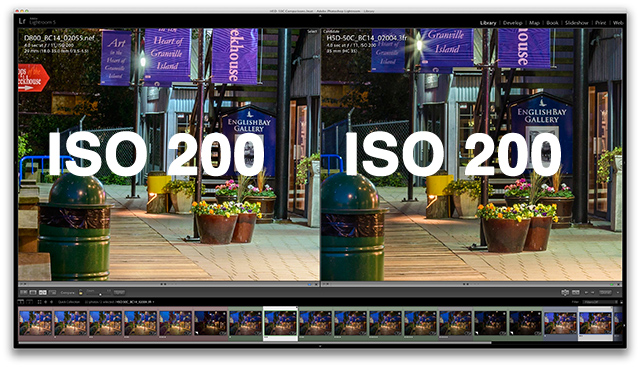 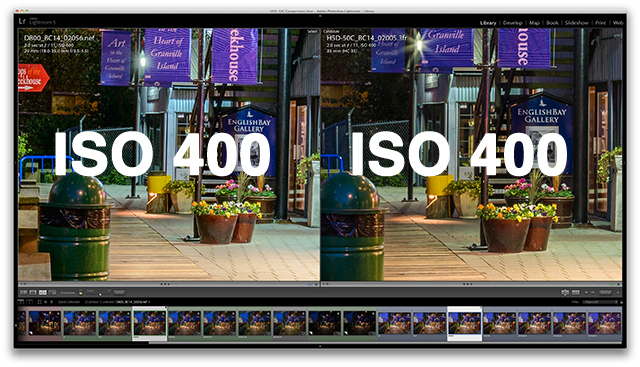 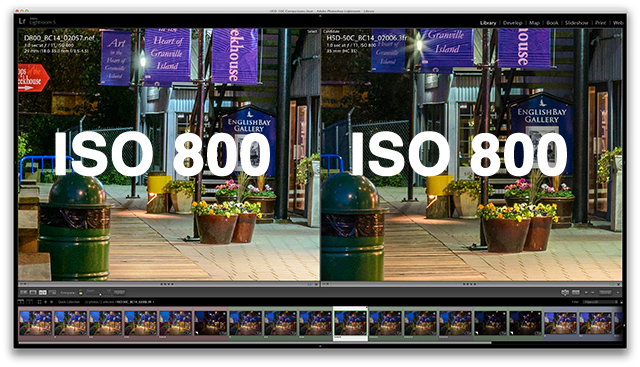 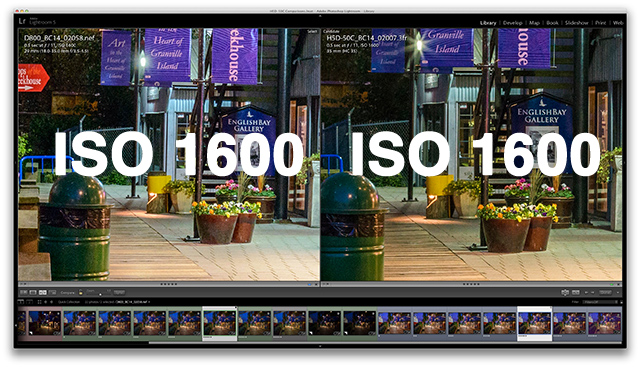 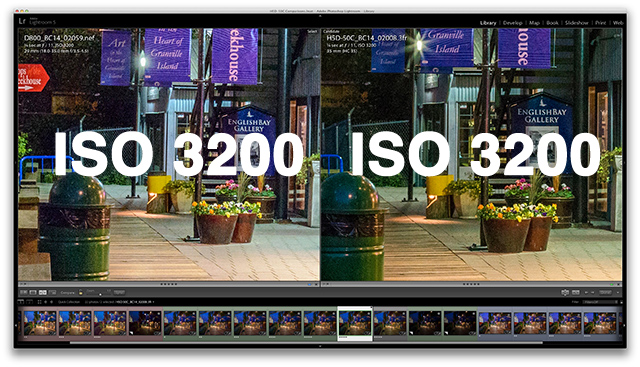 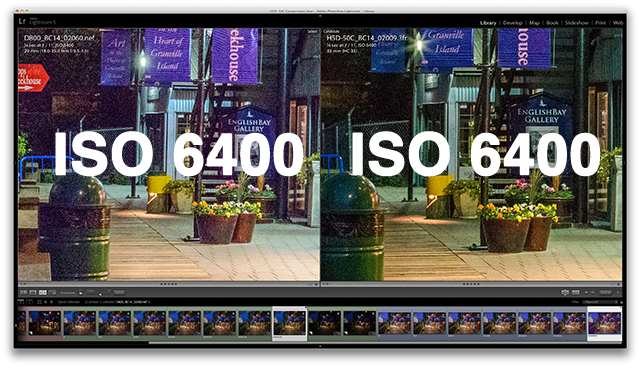 So that's about it for now. As you can see, the new H5D-50C essentially equals the D800 at lower ISO settings and as you go higher, it actually starts to look a little better even, especially at ISO 3200 and 6400. In fact, the overall look of the sensor noise is remarkably similar: virtually no chroma noise showing with Lightroom's default of 25 for chroma NR and no pattern noise or blotchiness either. Higher ISOs show mostly "white speck" noise on both cameras. This new Hasselblad is going to be a tremendous asset for anyone needing to do high resolution shots in difficult situations where faster shutters speeds in low light could mean the difference between getting a usable shot, or not...

Imagine a promotional, available light, indoor restaurant shoot where you want a lively look, one that is not staged but you want people to still appear sharp. Previously, you'd either have to use strobes (a big job if you didn't want it to look like you had used strobes!) or resign yourself to shooting higher ISOs with a DSLR to freeze the patrons and waiters, sacrificing the resolution and look of a medium format camera. Suddenly, this type of shoot becomes feasible with the H5D-50C.

Say you are up on a hydraulic lift, shooting a twilight real-estate shot outside and the wind is blowing. Your lift is swaying slightly in the breeze, just enough to make those 2 second, ISO 100 shots from your old digital back look blurry. With the H5D-50C, you could shoot at ISO 800 or even 1600 and get the same image quality with a 1/4 or 1/8 second exposure and substantially reduced blur.

Anyway, I am sure you can imagine all sorts of possibilities opening up, if you were able to capture a clean, full-resolution, higher ISO shot with your digital back! If you have any specific questions, please do feel free to email me...
Posted by Mike Mander at 2:57 PM