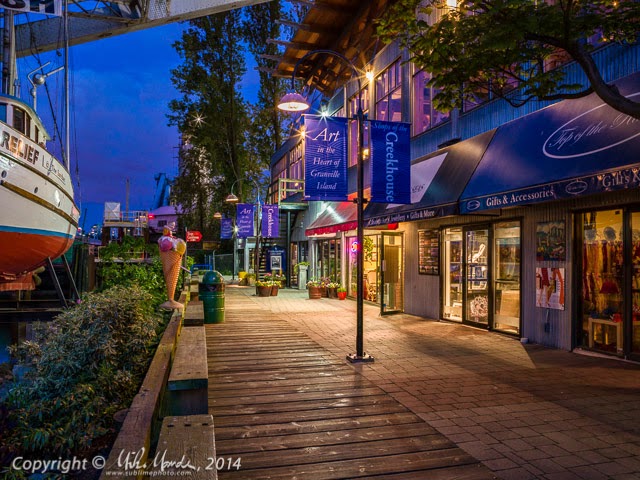 We recently had an intro event for the new CMOS sensor equipped Hasselblad H5D-50C and I had a chance to do some side by side tests with the previous CCD equipped model. The new CMOS 1.3x crop 645 medium format sensor used in the H5D-50C is actually made by Sony, and that's a good thing since they also make the best sensors for the DSLR world. The Nikon D7000, D800 / D800E and even the underlying silicon used in Fujifilm X-Trans sensors are made by Sony for example. What this means for medium format camera systems is that finally, there is a sensor capable of not only superb low ISO sharpness and tonality, but also excellent high ISO image quality with much less chroma noise in the shadows when those shadows need to be opened up in a high dynamic range scenario.

In addition, this new sensor seems to have slightly better highlight dynamic range as well and you can also do much longer time exposures with no need for long exposure noise-reduction, up to 12 minutes in length. This means after a 12 minute exposure, you don't need to wait an additional 12 minutes for the camera to do a "dark frame" - you can start another time exposure immediately.

The previous CCD sensors did indeed have very good shadow tonality when shot at their base ISO, as long as one didn't push those shadows too far in post, but the new ones allow you to also do this at much higher ISOs and still open up the shadows dramatically without any major loss in quality. In fact the differences between the old 1.1x crop factor 50MP CCD sensor and the new 1.3x crop 50MP CMOS sensor are so dramatic that I could scarcely believe what I was seeing when I did some challenging side by side tests. Basically, OMGYHGTBK* was my reaction upon comparing the images side by side!


Absolutely the only downside I see with the new camera is that for those seeking the widest angle shots, they will be disappointed with the slightly greater crop factor of the smaller sensor. However if you are an available light photographer of any kind, where you have no control over lighting and are often dealing with challenging lighting, you absolutely need to consider upgrading your camera - the difference is really that great. Buy a wider lens if you need it! Yes, I know the Hasselblad 24mm or 28mm lenses are expensive, but they are both exceptionally good too. In fact, if you have a 28mm or 35mm lens, the next widest offering when shot with the new 1.3x crop sensor will more or less give you the same angle of view. The 28mm on the 50C will be slightly wider than the 35mm on the regular 50, and in the same scenario, the 24mm will be ever so slightly longer than the 28mm.

The image at the top of this blog entry was underexposed on purpose, more than it actually needed to be in fact, in order to maintain as much highlight detail as possible. It was then adjusted dramatically in Adobe Lightroom v5.4 to bring up the exposure in the shadows and mid tones.

Above is a side by side of that image, the left side being with all the exposure sliders zeroed and the right side adjusted to taste. Click on the image to see a larger version.

The series of test shots I did were intentionally shot dark, knowing that I would be cranking things up, in order to torture test the new CMOS equipped Hasselblad and to highlight just how much better it performs in really difficult situations when compared to the older CCD model.

To the left, is a screenshot showing the Lightroom settings used in the brightened, adjusted version of that image, as well as all the comparisons below. You can see how far the exposure and shadows have been pushed...

The most challenging subjects are ones with bright highlights and deep shadows, where one often underexposes to maintain important highlight detail and then boosts the shadows and mid-tones in post to increase the visible dynamic range of the shot. My Nikon D800 does this exceptionally well but previous digital backs would often start getting noisy in the shadows, especially if you were shooting at anything other than base ISO. The new sensor is so good that in a high-DR situation, you can shoot it at ISO 800 (let's say you need the shutter speed to freeze things moving in the shot), underexpose and then boost the shadows like crazy, as in the above example, and still end up with a cleaner file than the old 50MP CCD sensor at ISO 100 in the same situation. In fact, apart from some "white speck" noise, similar to what one sees on a D800 at times too, the new back at ISO 1600 will even outperform the old one at ISO 100 when it comes to chroma noise in the shadows. Massive, huge, amazing difference if you ask me.

Below are a bunch of side-by-side screen shots at 100% zoom in Lightroom, where each image pair was shot with identical settings, starting at ISO 100 and going to ISO 800, the range where both cameras overlap. Note that I used a 50mm lens on the H5D-50 and a 35mm lens on the H5D-50C, so that I could shoot then simultaneously and avoid the changing light levels causing differences in exposure between the cameras. That is why the 100% zoom views are showing different degrees of magnification of the scene, however since these shots are intended to judge noise and shadow detail, that doesn't really matter. Note that the 35mm lens is quite old and needs some optical tweaking to perform up to snuff. The 50mm is a brand new version II we have in rentals now and it is amazingly sharp, clearly outperforming the 35mm in acutance.

As with the above side-by-side exposure example, click each one to open in a new window to allow 100% viewing in order to accurately judge the differences. In all cases the older H5D-50 (CCD) is on the left and the newer H5D-50C (CMOS) is on the right... 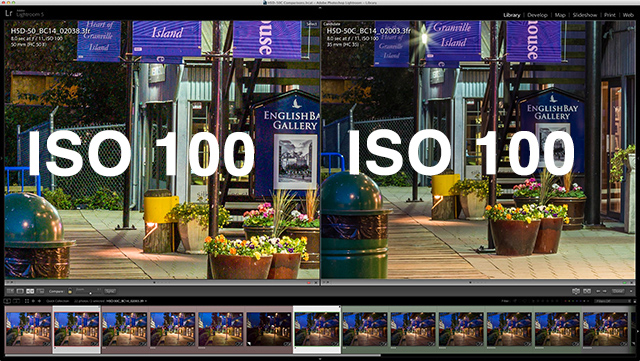 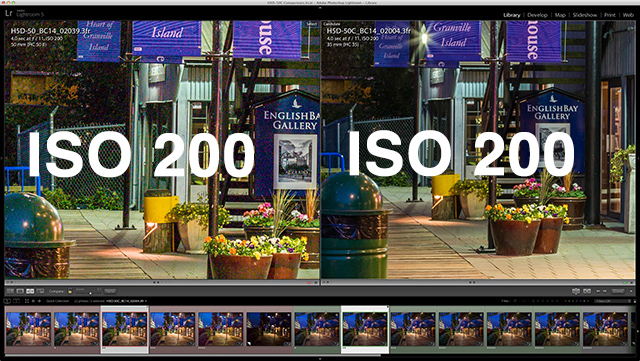 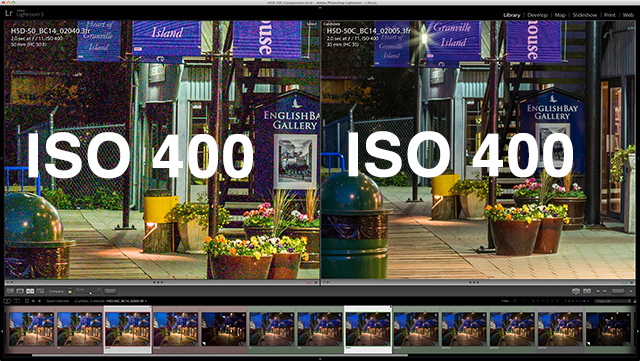 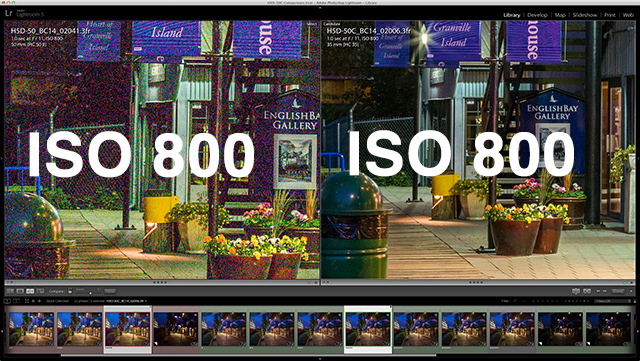 Here is a comparison with both cameras at their lowest ISO... 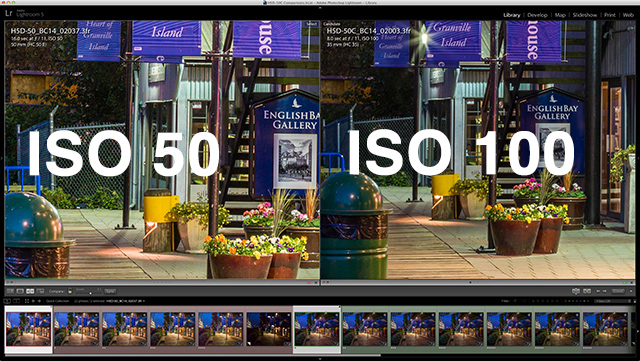 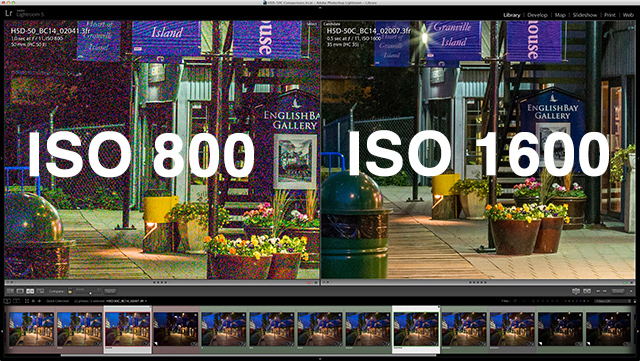 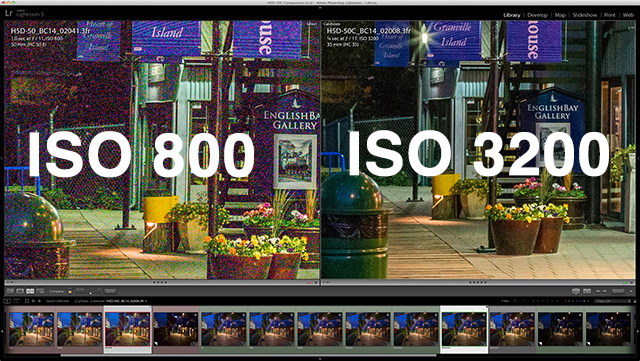 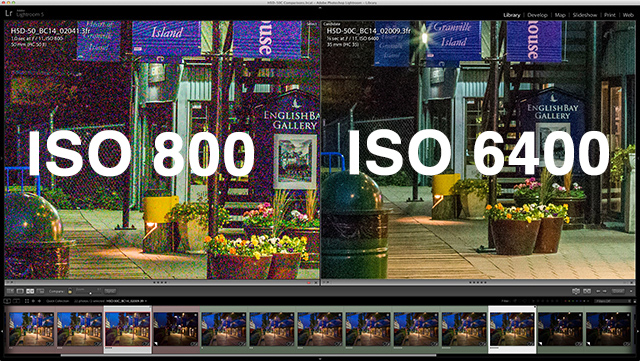 The H5D-50C is shipping now and upgrades are being done pretty much immediately. If you have an older Hasselblad digital system, aggressive trade-in allowances are available from Hasselblad. If you are strictly a studio shooter where you have complete control over your lighting and contrast, you might decide to pass this one by, but for anyone else I'd say it really is worth seriously looking at an upgrade. This is a far greater upgrade than simply going to a higher resolution digital back with old sensor technology. The image quality improvements can be staggering! Call me for more details or if you want to get a price quote on a purchase or trade-in...