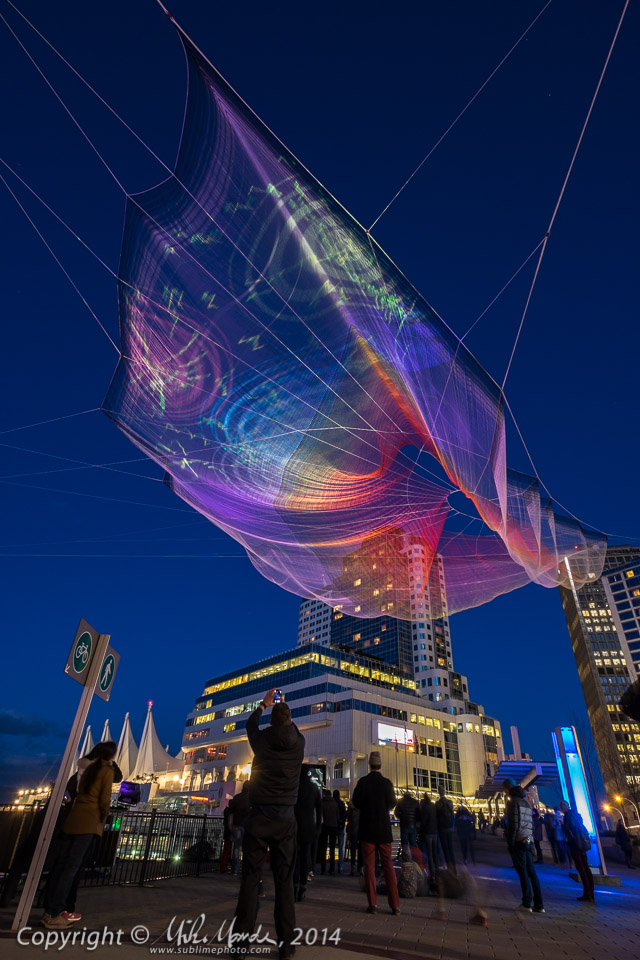 For a gallery with a variety of samples, click the image or… Fujifilm XF 10-24mm Samples

We finally received a small shipment of the new ultra-wide-angle Fujifilm 10-24mm zoom lenses and I have also received my own personal one. By and large, I am very impressed with this new zoom which is equivalent to a 15-36mm zoom on a full-frame camera. It stays at a fixed f/4 throughout its zoom range and also has an amazingly effective OIS unit - the Optical Image Stabilizer. I did a series of shots at 10mm in near darkness with a 0.8 second exposure, so nearly a full second. Of the ten photos, two were unusably blurred, three were a bit blurry but would still make decent 8x12 inch prints I'd say, but five were actually tack sharp, looking almost like they were shot on a tripod. That is the advantage of having an effective stabilizer on an ultra-wide lens! I have also done a handful of shots at 1 second at around 17mm focal length and while the hit rate is a little worse, even that is doable if you try hard. Examples of both are in the above linked gallery. However there can be a disadvantage to OIS…

When the light is good and the shutter speeds are high enough, I would actually suggest turning off the OIS. As of this writing, I have only shot with the new lens a little but I think I have seen "OIS induced" corner softness, where one corner is distinctly softer than the others. This is something I have often seen on stabilized wide-angle zooms (I once went through three copies of a certain lens on a different camera system before giving up on it entirely) so nothing all that unusual to me. You also have to be looking pretty closely in order to notice it on this lens since so far the effect has been fairly slight only.

The good news here is that with the OIS off, it seems as though the OIS lens group will perfectly centre itself and I saw very consistent corner sharpness when doing some nighttime tripod shots. Personally, if I was the one designing that lens, I would have left out the OIS since ultra-wide lenses can be notoriously difficult to assemble and align properly, even without having a lens group flying around inside! However this lens seems solid optically, so some of my fears are unfounded I'd say. One note is that even when the stabilizer is switched off, you can hear the OIS system humming quietly. This would indicate that the OIS is used to the keep the stabilizing lens group centered when switched "off" rather than a mechanical method, like springs for example. In some ways I think this is preferable and more likely to stay consistently aligned long term, although I imagine that battery consumption might be noticeably higher with this lens for that reason.


One of this lens' strongest points is its flare resistance - there are five examples demonstrating that in the above gallery. It is phenomenally well controlled for flare in high contrast situations, especially considering it is an ultra-wide zoom. In fact, while it doesn't quite match Fujifilm's stunningly good wide-angle primes for overall image quality (more on that in a moment) I feel as though it actually beats them for flare resistance. With the sun right in the frame at 10mm, there is some loss of contrast and there are some subtle coloured flare rays extending quite a way outward from the sun (not the bright flare "spikes"), visible in darker shadows and especially when stopped down beyond f/8, however there is no row of big, bright colourful hotspots extending in a row through the centre of the frame, or opposite the centre of the frame like I've seen on so many other wide-angle lenses. Yes, there are a few subtle spots and a couple of really tiny brighter ones (easy to retouch) but overall I am impressed!

However one thing I will note is you will have to keep the front element meticulously clean with no dust specks if you plan on shooting into the sun. I have seen some random dim flare spots that are not aligned with the optical axis of the lens when shooting with the sun in the frame, and those pretty much have to be due to the dust I had on the front element. The last image in the above gallery was shot straight into the sun, and the river in the foreground had absolutely no purple or blue fringing around the specular highlights glinting off the water. That is also impressive. On that shot, there are a few off-axis white flare spots and I believe those were due to dust on the front element of the lens.

In terms of barrel distortion, this lens does have it, especially at 10mm - see the above animation showing the native barrel distortion before and after being fixed in PhotoNinja. This distortion will be corrected for automatically for in-camera JPEGs and also in Lightroom and Photoshop, but with a different raw converter like PhotoNinja, you will see it and/or may want to correct for it yourself. As you zoom away from 10mm and towards 24mm, the barrel distortion does lessen, becoming minimal beyond 18mm or so if I recall. If you are using this lens for landscape work, it also won't be much of a problem, unless you have a perfect horizon line or tall, straight tree near an edge of the frame. For comparison, the 14mm and 23mm primes have virtually no barrel distortion at all.

The lens does have some chromatic aberration as well and you will want to correct for that in your raw converter of choice too. Note that it's generally easier to correct for than the blue/purple specular fringing I mentioned earlier. So, both in terms of barrel distortion and chromatic aberration, the Fujifilm 10-24mm is substantially inferior to the 14mm f/2.8 or the spectacular 23mm f/1.4, neither of which suffer from either affliction. However both of those primes are pretty much the most impressive wide angle lenses I have ever used, so it would have been unbelievable had the zoom actually equaled either of those two!

How about sharpness compared to the other primes? At 14mm, it actually nearly equals the 14mm prime, especially above f/5.6 but when compared to the 23mm f/1.4 it definitely falls well short. In fact, personally I will try to avoid the 22-24mm end of that lens and will definitely mount my 23mm f/1.4 when I need something in that focal length, however it will be a tough call at 14mm… would I bother switching to the prime if I want to shoot at 14mm? A bit too early for me to tell probably.

Going to the widest 10mm focal length, once you get to around f/7.1 or so, the lens is performing very well with only the slightest hint of any corner softness. The centre seems impressively sharp even wide open at most focal lengths. If you are shooting something that does not require perfect correction for distortion, you will also benefit from using a raw converter that allows you to turn off distortion correction since fixing distortion can have a slight detrimental effect on corner sharpness due to the stretching that the correction applies.

Anyway, this was just a quick first look since I have not shot all that much with this lens yet. While not as spectacular optically as the 14mm and 23mm primes in most ways, it still performs extremely well for such a wide and versatile lens in my view. Until Fujifilm comes out with a fixed 10 or 11mm lens, this is probably going to be as good as it gets for the X-system as far as ultra-wide lenses. I will most certainly be shooting with it a lot on my trip to the US desert southwest this month so I should have a better handle on its performance when I return…